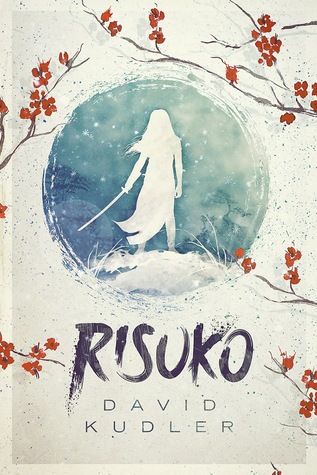 Goodreads Overview:
My nation has been at war for a hundred years, Serenity is under attack, my family is in disgrace, but some people think that I can bring victory. That I can be a very special kind of woman.

All I want to do is climb.

My name is Kano Murasaki, but everyone calls me Squirrel.

Though Japan has been devastated by a century of civil war, Risuko just wants to climb trees. Growing up far from the battlefields and court intrigues, the fatherless girl finds herself pulled into a plot that may reunite Japan — or may destroy it. She is torn from her home and what is left of her family, but finds new friends at a school that may not be what it seems.

Magical but historical, Risuko follows her along the first dangerous steps to discovering who she truly is.

Kano Murasaki, called Risuko (Squirrel) is a young, fatherless girl, more comfortable climbing trees than down on the ground. Yet she finds herself enmeshed in a game where the board is the whole nation of Japan, where the pieces are armies, moved by scheming lords, and a single girl couldn’t possibly have the power to change the outcome. Or could she?

First thing first, I really enjoyed reading this book and am still suffering from a book hangover several days after reading it. I was a bit apprehensive when reading this book as I believed it started off a little slow and found it somewhat difficult to be fully immersed by it, but eventually I got to the point where I just couldn’t put it down. If you are a sucker for anything mythological (which I won’t say much about because of spoilers) and learning about other cultures then this is the perfect book for you. One of the most interesting things about reading this book is the amount of detail that goes into transporting you to another world and another culture, including descriptive details of beautiful and not-so-beautiful places and allowing you to gain great insight into a newly founded world and culture.

The protagonist Murasaki, aka Risuko, is such an amazing character. She is taken away from her mother and sister without any explanation or time to say goodbye, lost her father when she was a child and had to adjust to a complete new environment, doing things she has never done before, whilst trying to make friends with those who dislike her and figuring out what all this is about. To me, she is an extremely strong character and becoming one of my favourites. In addition to her brilliant attitude to life and her tragic-background, she also shows great character development as she goes from you average ‘quiet girl’ who does as she is told, to someone who breaks the rules and risks her life to help the ones she cares about.

Risuko faces many challenges throughout such as trying not to let the miserable Toumi, an orphan taken from her family the same time Risuko was, bring her down and bother her despite her rude and unnecessary remarks to everyone, as she seems to dislike everyone and everything. In addition to this, at her new home she is made to complete useless tasks such as butchering animals for meals for her ‘training’, which would be tiresome and awful for any young girl. However, Risuko does make some friends in this peculiar place. There is Emi, who also arrived with Risuko and Toumi and although she doesn’t smile and has her defense up all the time, she grows to become a mysterious, yet lovely character who you can’t help but like.
Then there is Musugu. He is a lieutenant and a samurai who has a sense of mystery about him, making him all the more attractive and appealing to some female characters in the book.  A good book wouldn’t be a book without a little bit of romance thrown in for good measure. Although it isn’t obviously stated that there is anything between Risuko and Musugu, I kind of got the feeling that she had a bit of a ‘thing’ for him and I really hope their relationship does blossom.

Although everything seems straight-forward throughout this book (despite the ending) there was always a sense of unknowing about this book, as it left you with unanswered questions and as you reached a new chapter or page it was slowly unraveling these mysteries and you could see the light at the end of the tunnel where all your answers would be. The best thing about this, despite the agonizing need to know things, was that it truly connected you with the characters, in particular Risuko as you found things out as she did, and I really like the idea that you was taken on a journey with her and thought it helped in understanding and sympathizing with her and other characters throughout the book.

I would definitely recommend this book to read as it was very cleverly and beautifully written and despite not knowing much about the Japanese culture, it was an easy read and didn’t cause any confusion whatsoever. I can not wait to find out more about Risuko and her journey to becoming a new woman with extraordinary talents which she is yet to discover and refine.