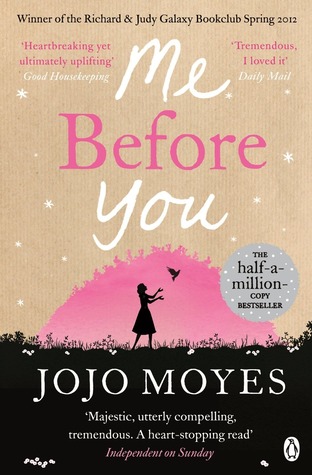 Lou Clark knows lots of things. She knows how many footsteps there are between the bus stop and home. She knows she likes working in The Buttered Bun tea shop and she
knows she might not love her boyfriend Patrick.

What Lou doesn’t know is she’s about to lose her job or that knowing what’s coming is what keeps her sane.

Will Traynor knows his motorcycle accident took away his desire to live. He knows everything feels very small and rather joyless now and he knows exactly how he’s going to put a stop to that.

What Will doesn’t know is that Lou is about to burst into his world in a riot of colour. And neither of them knows they’re going to change the other for all time.

I’m sure that anyone of the internet or social media knows about this book by now. It’s a bestseller and has recently had a movie been released based on it. Buying this book several years back, I thought it was going to be a really enjoyable, basic love story, but finally reading it now, how wrong was I. Despite this book being tremendously enjoyable, it was also painful and heart-wrenching. Although it sounds really cliché, it made me laugh a lot and cry even more. Throughout the book is filled with witty banter and sarcasm that encourages a smirk to appear on your face.

The book is based around the two characters of Lou/Clark and Will, who have recently become 2 of my most loved characters to this date. Lou is a small-town girl, who enjoys her simple life, caring for her family and brightening up people’s day’s with her chatty and positive attitude and her bright, colourful and very eccentric outfits.
Then there is Will. Before his accident, Will was a very successful business man who had it all going for him, the job, the girlfriend, the house and his ability to go anywhere and do anything. But after his accident confined him to a wheelchair, cutting off access to use his legs, arms and limited use of his hands he no longer had any of these things and believed his life wasn’t work living anymore.

However, when Lou gets hired by his mother to be a secondary carer and bring some sunshine into his miserable life, we see great changes from both Lou and Will. Lou becomes more daring to do things and spread her wings a little by doing things that her boyfriend, family and ever herself didn’t think she was capable of.
During the first couple of weeks of Lou and Will knowing each other, they didn’t get along at all; they never spoke and tried to stay away from each other as possible no matter how hard Lou tried to cheer Will up. However, when conflicts arose and they began challenging each other with their opinions on how each other should live their lives, that was when things took a turn for the better. Will was still his arsehole self with his rude remarks and sarcasm, commenting on every little thing that Lou did, but he did it with a smile on his face, something that his mother hadn’t seen since his accident 2 years ago, and believe me, some things he says, despite being mean, are very comical and it’s hard not to fall a little bit in love with him and their relationship.

Of course, any romance novel won’t be a romance novel with a bit of drama. With Will being a quadriplegic, he is prone to diseases, discomfort and generally being ill. During this times we really see how much Lou has come to care for her friend and the effort she will go to to make sure she can doing anything humanely possible for him to feel comfortable and happier. In addition to this, we are also able to see how much of a strong character Will is, as no matter his discomfort he barely ever complains and just gets on with what needs to be done to make himself better.

Despite the slightly problematic and series parts of this book, there are also aspects that are packed with happiness and fun. During their months together Will and Lou go to a wedding, a castle, horse race and even Mauritius, so you can imagine all the fun they had on these adventures, or not.
Throughout reading this book, I couldn’t help but smile ear-to-ear on more or less every page, with some parts literally making me laugh out loud, I’m not even kidding, that Will is one funny guy. My only regret of this book is that I wish that I would’ve read it sooner, hence why I read it in less than 24 hours, which for me is quite an achievement with it being 479 pages long. I know, impressive.
I would totally recommend this to absolutely everyone, even if you’re not a romance lover, I’m sure that without a doubt you will enjoy this one as it isn’t your typical romance novel unless you find calling each other every few pages something to fantasize about. The whole was so brilliantly done and although it broke me at the end, I would reread it over and over again.
Also as I mentioned earlier, there is a movie out to this incredible piece of fiction and I’ll most like post a review to that after I stop crying from it.

A Few Favourite Lines (without spoilers)
-“Only you, Will Traynor, could tell a woman how to wear a bloody dress.”
-“Push yourself. Don’t Settle. Just live well. Just LIVE.”
-“You only get one life. It’s actually your duty to live it as fully as possible.”
-“I hadn’t realized that music could unlock things in you, could transport you to somewhere even the composer hadn’t predicted. It left an imprint in the air around you, as if you carried its remnants with you when you went.”
-“Sometimes , Clark, you are pretty much the only thing that makes me want to get up in the morning”
-“Best before: 19 March 2007”
– “Knowledge is power,”