Victoria Mahler is the sixteen-year-old only daughter of rocker Micky Wayne, whose 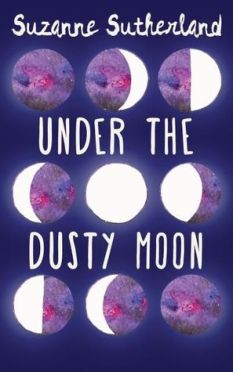 band, Dusty Moon, took the world by storm when Micky was just a teenager. The band broke up under mysterious circumstances, but, after years spent off the road being a mom, Micky’s solo career is finally starting to take off.

When an offer to tour Japan falls into her mom’s lap, Vic is left to spend the summer under the care of her distant grandmother, and without her built-in best friend. Fortunately, a boy with a secret geek side and a group of feminist game-makers save the season, and Vic starts to see herself as her own person, out from under her mother’s shadow.

But when Micky finally comes home — with a poorly chosen boyfriend in tow — all bets are off. Will Vic be able to maintain her newfound sense of self amidst the building thunder of Micky’s second chance at stardom? And through it all, will Micky still really be her best friend?

Personally I’m not the biggest fan of contemporary novels as they don’t really excite me as much as sci-fi and fantasy novels do and this book wasn’t really any exception. Despite this, it was a pleasant read with lovely descriptions and situations that most teenage girls can relate to. There were two main issues with this book that made me not enjoy it as much as i’d like. One of them was that it wasn’t really all that exciting. I, personally love a good book with lots of action and suspense and this book lacked that. Another thing was that I really didn’t like the main character Vic.
Although she was written lovely and many others might like her adventurous and daring personality, she wasn’t really my cup of tea. This may be because she did things- such as abandoning her friends for a boy – that people have done to me in the past therefore she reminded me of them a little.
Despite some of her annoying actions and decisions she isn’t all that bad I suppose. She is an overall nice character who is a bit shy when it comes to boys and expressing her ideas to friends and family and wants to get away from the limelight her mother has created for her.

Her mother on the other hand, Micky, the cool ex-band member of the popular band Dusty Moon is something else. I really loved her laid-back attitude and that she really didn’t care what people thought of her and that if she wanted to do it she just did it. She is a very determined character with an upbeat personality whom anybody would wish you have has their friend.
Vic’s best friend Lucy lives around the corner from her and is a lovely character. Her family own the local shop and her and Vic have been best friends since Vic moved there several years ago. Just like many of us, she is a fangirl. She has a major obsession with a game called Lore of Ages, just like many of us have obsessions with books! However, once Vic starts hanging out with her love interest Shaun, Lucy tends to get left behind and forgotten about which is quite sad.

One thing that could be improved within this book is the sub-plot of the disappearance of Dusty Moon’s guitarist and Vic’s dad. Although it is mentioned a couple times within the book, there’s never really any development on the subject and it is never truly explored, although there are Dusty Moon fan conspiracies and it does in a way add some mystery to the book, but I think there could’ve been a bit more focus on it.

Despite these minor downfalls of the book, I did overall enjoy the book. It transported me to the summer days of lazing about and doing nothing, other than enjoying the warmth of the sun and a good book. I would recommend this book to those of you who like contemporary novels, with it being an enjoyable and uplifting book.