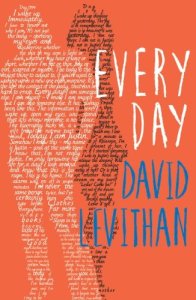 There’s never any warning about where it will be or who it will be. A has made peace with that, even established guidelines by which to live: Never get too attached. Avoid being noticed. Do not interfere.
It’s all fine until the morning that A wakes up in the body of Justin and meets Justin’s girlfriend, Rhiannon. From that moment, the rules by which A has been living no longer apply. Because finally A has found someone he wants to be with—day in, day out, day after day.’

I didn’t plan on reading this book but I came across it during a shopping trip and decided to invest in it as I had heard many great things about David Levithan’s other book ‘One Day’. I also watched the movie to this book which I thoroughly enjoyed, despite it making me cry a considerable amount.
The thing that attracted me to this book was that 1) I am a sucker for a good love story and 2) it was a very original story-line.
Being a lover of anything sci-fi fantasy, the story-line gripped me straight away. It was something I hadn’t come across before and was very intrigued to how the plot would progress to make a story.

A, the person who borrows the bodies of other male and female 16 year olds is a very likable character who you can’t help but sympathize with at times although as the story progressed, and he met Rhiannon – the girl whom he falls in love with – he becomes slightly annoying and I can’t help but dislike him a little bit.
This was the same process with Rhiannon. A met Rhiannon after being in the body of her boyfriend, Justin. He instantly fell for her and got somewhat attached from the get-go. Although, she is a seemingly nice character who herself has problems and genuinely seems to care about A, but not as much as he does.
Her overall personality and change of heart about making their relationship something more seemed to annoy me and thought she was a little whiny.

I found whilst reading the book that it become a little repetitive. Despite A being in the body of a different person every day/each chapter, I found that the story wasn’t focused on them people and their lives, instead it just became a pattern of living in a new persons body and then finding Rhiannon. The part that drew me into the book at the beginning was lost and it became too much about the relationship rather than A’s life.
I also found that one of the main aspects of the book that I enjoyed was lost. A was being contacted by a person whose body he has recently lived in and he wants answers. There is also many other exciting things that came from this but I shan’t spoil it. Personally, I thought that David would’ve done a lot with this story-line and made a great sci-fi novel concentrating on A’s journey as he gets older and why he is the way he is.
There was a great opportunity to make this book spectacular so I was a little let down.

Despite these negatives, I did overall enjoy the book and found it a pleasant, easy read. It is ideal if you fancy a little read curled up on the sofa. It is in some cases very heart-warming and I loved getting to know all of the many different people who A inhabited.
Because of this, I think I’m going to read One Day, which I have been meaning to do for sometime.
Let me know if you have read it and what you thought of either Everyday or One Day.