Well, what you look what it is – another unboxing! This week we will be unboxing the August Illumicrate box, which I have got to say was one of my favourite unboxings ever. I’m not sure I’ve ever been more excited to open a box as I was opening this one – they always do seem to excel. If you don’t know, Illumicrate is a quarterly bookish subscription box where every 3 months you receive a box full of exciting bookish items and a book. I received my first Illumicrate in May (you can find the unboxing here) which I adored so I obviously had to get the August box in order to avoid endless amounts of disappointment.

Without further ado, lets get onto the unboxing!

As with every box, here is the Illumicrate card which on the back has all the details of each item in the box.

‘The Red Church’ Tea by T-ologoy. An exclusive for Illumicrate and is the nicest smelling thing I have ever smelt in my life – I literally just want to open the packet and eat whatever is inside. I’m personally not a big fan of tea, but I am very much looking forward to trying this as it smells delicious. 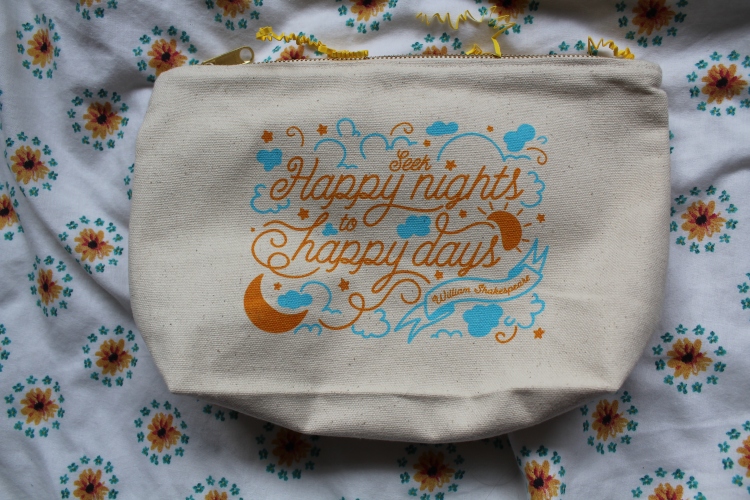 Shakespeare Zip Bag by Miss Phi (exclusive). A really good size and quality and I love the art work and colours, it’s so summery and reminds me of a warm peaceful day. I took this on holiday to Rome with me and was the perfect size to hold all my toiletries and cosmetics!

Alethiometer Coaster by Hannah Hitchman Art (exclusive product). Legit the most beautiful coaster I have ever seen and I absolutely adore it. Despite owning the book for several years, I haven’t actually got round to reading ‘His Dark Materials’, but I have however watched ‘The Golden Compass’ numerous times and I promise to one day read the series!

Book Money Jar by Blossom Books. Probably the most exciting item I have ever received in a subscription box! It’s so original and cute and is totally something every bookworm, like myself, needs in their life in order to save them pennies for excessive book buying! It’s the perfect addition to my shelves and I’m so glad I have it.

Sticky Bookmarks by Blossom Books. Again, another super cute item by this company and is totally something every bookworm needs in their life in order to keep track of all the amazing moments that happen in books! These are going to come in very handy. 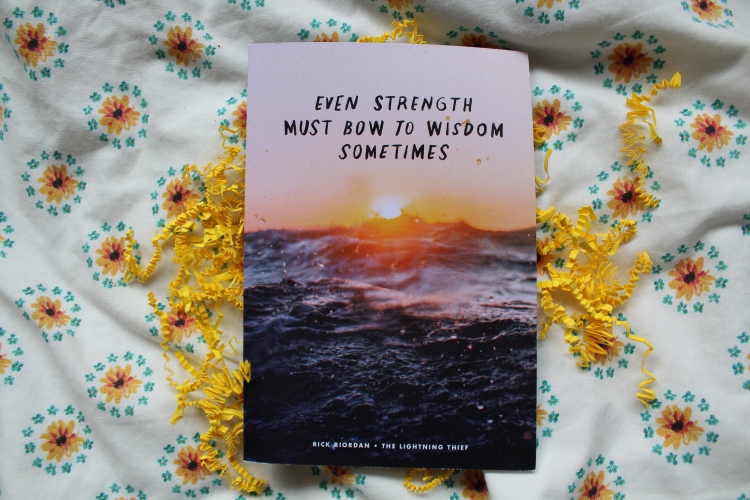 Wisdom Journal by Hey Atlas Creative (exclusive). The most visually pleasing notebook I have ever seen. I bloody love this design and I love the fact it has a Percy Jackson quote on it, but is very subtly Percy Jackson so it could literally be for anything. I just love it a lot and is perfect for jotting down some things about my recent trip to Rome.

A few little extras include ‘Moxie’ pins, ‘Ringer’, ‘After the Fire’, ‘The Bear’ bookmarks and a Harper 360 postcard. I do love me some promotional items which you all know, so the more the better! 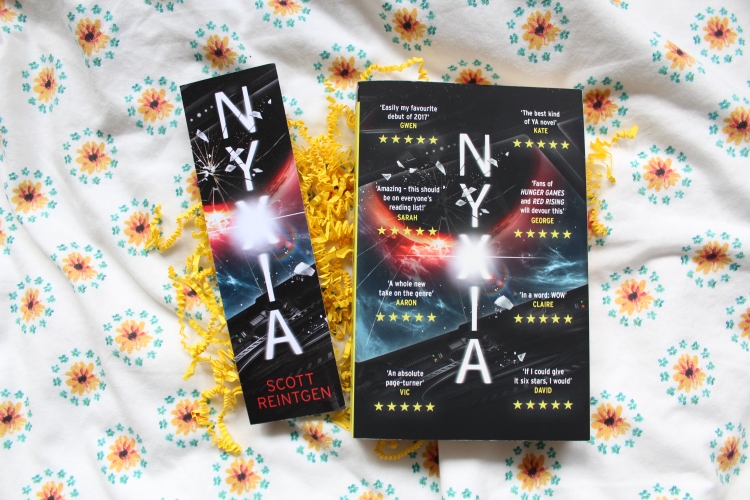 ‘Nyxia’ by Scott Reintgen (exclusive edition advanced readers copy) with bookmark. Yet again, this months Illumicrate came with two books which I was obviously thrilled about and you all know I do love myself some science fiction now and then so I was even more thrilled!

Emmett Atwater isn’t just leaving Detroit; he’s leaving Earth. Why the Babel Corporation recruited him is a mystery, but the number of zeroes on their contract has him boarding their lightship and hoping to return to Earth with enough money to take care of his family.

Before long, Emmett discovers that he is one of ten recruits, all of whom have troubled pasts and are a long way from home. Now each recruit must earn the right to travel down to the planet of Eden–a planet that Babel has kept hidden–where they will mine a substance called Nyxia that has quietly become the most valuable material in the universe.
But Babel’s ship is full of secrets. And Emmett will face the ultimate choice: win the fortune at any cost, or find a way to fight that won’t forever compromise what it means to be human.

As you can see, sounds like a really exciting book so it is definitely going on my ever-growing TBR pile. The book is available on September 12th.

Wonder Woman: Warbringer by Leigh Bardugo (exclusive edition) – comes with red sprayed edges and an exclusive pin. I knew we were going to to be getting this book prior to receiving this book as my Sherlock detective skills are on point of course, so was one of the things that persuaded to get this box again. It is a very highly anticipated book and very well rated by many people so I wanted to know what all the fuss is about, and what’s better than an exclusive edition? Why not eh? I’ve actually not read this yet as, I have for once, been super busy but when I do read and finish it you will know about it, as like everyone else I shall we posting a review yay!

She will become one of the world’s greatest heroes: WONDER WOMAN. But first she is Diana, Princess of the Amazons. And her fight is just beginning. . . .

Diana longs to prove herself to her legendary warrior sisters. But when the opportunity finally comes, she throws away her chance at glory and breaks Amazon law—risking exile—to save a mere mortal. Even worse, Alia Keralis is no ordinary girl and with this single brave act, Diana may have doomed the world.

Alia just wanted to escape her overprotective brother with a semester at sea. She doesn’t know she is being hunted. When a bomb detonates aboard her ship, Alia is rescued by a mysterious girl of extraordinary strength and forced to confront a horrible truth: Alia is a Warbringer—a direct descendant of the infamous Helen of Troy, fated to bring about an age of bloodshed and misery.

Together, Diana and Alia will face an army of enemies—mortal and divine—determined to either destroy or possess the Warbringer. If they have any hope of saving both their worlds, they will have to stand side by side against the tide of war.

So that is it once more! Another glorious box from Illumicrate where I adored every single item as usual. Book boxes really never do fail to amaze me and I wish I could buy them all! I’m not sure if I’ll be getting the November box as my finances aren’t too swell at the moment, but if not you’ll be sure to hear of my disappointment of missing out.

I hope you’ve all had a wonderful day and I’ll see you in the near future!