it at university!), and there’s nothing I enjoy more than a good ol’ comedy. For many years I have watched Melissa Mccarthy graces our screens with her extraordinary talent, making me laugh and laugh until there is no more – she is one of my favourite actors and I would very much like to steal her career.
So in honour of my love for her and her movies, I have decided to list all of my favourite movies of hers and hopefully persuade some of you to experience the greatness that is Melissa McCarthy.

‘Spy’ is probably one of the most hilarious and underrated movies going. I honestly can

not remember having laughed so much at a film prior to this movie. It was released in 2015 and is an action comedy spy film written and directed by Paul Feig (also wrote the new Ghostbusters). In addition to Mccarthy it also stars Jason Statham, Rose Byrne, Miranda Hart, Bobby Cannavale, Allison Janney and Jude Law. It follows desk-bound CIA agent Susan Cooper (McCarthy) turned field agent as she goes undercover to foil the black market sale of a nuclear device. It may not sound like much on paper, but trust me you will not be let down by this movie – the comedy and humour is pulsing from it with stupid sly remarks and slapstick comedy from Jason Statham who for me provided the most comedic elements which was a huge surprise considering he is well-known for his action movies – I highly recommend he does more comedy in the future. It’s just very perfectly written and besides the constant comedy leaving you chuckling every several minutes, has a very good plot line and twist, which is always good. But most of all the script is pure perfection, the comedy seems so effortless and natural resulting in it being more funny. There are some elements that are just ridiculously stupid, but they make it better and one of the main reasons why I adore this movie so much.
Due to these factors, this has got to be one of my favourite Melissa McCarthy movies (or even movie in general). I hope to one day write a movie as fantastic as this. I know it’s on Netflix UK, so all you brits out there have no excuse!

Even though McCarthy doesn’t play one of the main roles in this movie, I still think her 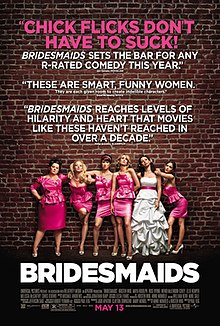 character is a valued attribute to its success and comedic value. Just my opinion. Released in 2011, ‘Bridesmaids’ is a comedy also directed by Paul Feig, written by Annie Mumolo and Kristen Wigg, starring Kristen Wigg, Rose Byrne, Maya Rudolph, Chris O’Dowd, Rebel Wilson and so many more. It centers on Annie who after being asked to be maid of honour by her best friend, suffers several misfortunes. There’s a disaster at the dress fitting which results in the bride emptying her bowls in the middle of the road, a fight involving a large heart-shaped cookie and the bridal party being removed from a flight to Las Vegas – as you can see it all sounds very exciting! McCarthy plays the role of Megan, the sister of the groom, and as you can imagine her character isn’t your conventional person – she has a very big ego, a love of dogs, a tendency to do as she pleases and isn’t afraid to speak her mind. I watched this film with my parents a couple of weeks back and my dad thought Megan was hilarious, so if that doesn’t convince you she’s funny, I don’t know what will. Opposed to ‘Spy’, this has a different plot completely and quite a sad one if you think about it – the protagonist Annie, hits rock bottom, she has a rubbish job, is single and has to fight for the affection of her best friend with someone who is seemingly perfect in every way. It’s a hard life.
If you need anymore persuasion then just know that Wilson Phillips also star in it – if you don’t know who they are, have a listen to their most popular song here.

Despite this film being out after Bridesmaids, it’s actually the film that made me fall in 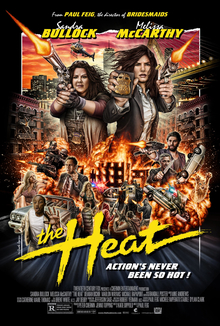 love with Melissa McCarthy and all of her movies. It was released in 2013 and is a buddy cop action comedy, also directed by Paul Feig. It centers of FBI agent Sarah Ashburn (Sandra Bullock) and Detection Shannon Mullins (McCarthy) whose mission it is to take down a mobster in Boston. One of the things I love about this film is the chemistry between McCarthy and Bullock that seems so natural and fluid and really plays well to the characters and the comedy in this film. They literally just bounce off each other and simply makes everything more effective and funnier. Many of you bookworms will be familiar with the gif of a woman throwing a book at someone saying ‘read the book’ – well that woman is Melisa McCarthy and that film is this one. Woah shocker, I know. Now go watch it!
Both of the characters are both polar opposites of each other with Mullins being an outcast who nobody takes seriously, with a total ‘I-don’t-give-a-shit’ attitude that will instantly make you love her (one of the first scenes with her, we see her throw a watermelon at someone – what more could you want?), whereas on the other hand, Ashburn is professional, proper and kind of stuck-up. Of course though once she meets Mullins she finally becomes herself and it is wonderful to watch. Totally recommend of course.

Of course I absolutely adore more or less everything that Melissa stars in (including Gilmore Girls), but these are the movies that I cherish dearly and stand out most to me. You could also say that this is a post dedicated to Paul Feig as well considering he directed all three of these movies which I was not aware of prior to this blog post.
However, I am a huge fan of both of their work and can not wait to see what the both of them produce in the future. No doubt they will be fantastic.