First of all I would like to say thank you to the author – T.R. Wolf for contacting me about
reviewing the book! I was so exited to receive it, and jumped right into it as soon as it arrived and was honestly such an enjoyable read. 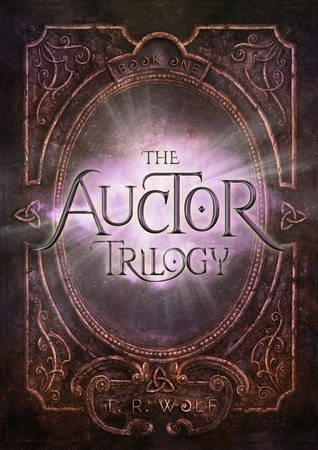 When seventeen-year-old Addie Auctor’s mother is murdered by her father, she must confront many secrets that her family has hidden from her. The worst of these secrets is that Addie’s father, Donovan Hawthorne, is still hunting Addie because of an ancient blood feud between her mother’s family, the Auctors, and her father’s family, the House of Hawthorne. In order to be protected from the House of Hawthorne, Addie and her brother, Augustus, are sent to Initiation at an exclusive University, the Wicked Cabal.
Initiation is nothing like Addie expects. She is immediately separated from Augustus and thrown in with four complete strangers – Fallon, Maddox, Liam, and Tempe. Addie must try to forge friendships with her fellow Initiates while they solve clues, battle mystical creatures, and explore increasingly dangerous places.
Readers of all ages will love this adventure filled with suspense, treachery, and romance.

The first thing I noticed when beginning to read this book was how fast-paced it as was as you were literally thrown into the action. This can be either good and bad as it worked well with the plot of the story where the protagonist (Adelaide, also known as ‘Addie’) was cast into a complete new, strange life of sorcery and magic, without a second to breath or take it all in, so it allowed you to connect and empathise with her, but in contrast to this I found that in some details were a little sketchy and was somewhat difficult to picture in my head, particularly as the story and the adventure progressed.
Despite this, it was extremely interesting when Adelaide discovered new information about her heritage – magic, sorcerers – because we, as the readers, only knew things whenever she discovered it, and when you like Addie are surrounded my characters who know everything you want to know the answers to – like ‘what is a Trilogy?’, or ‘why did Addie’s dad kill her mum and now after her?’ – it’s difficult not to get immersed into the story and race through it so you can uncover new things about the unknown world of magic in regular everyday life.

A very refreshing feature of this book was that unlike many books where a character discovers they aren’t who they thought they were, and in fact magical or lead some fantastical life and they just accept it in like 2 chapters then act like they knew this information all their lives; the protagonist in this book was a little more subjective and cautious of her new found heritage, which for me made the book a whole lot more realistic and actually made me like Adelaide more as a character.
Another feature of this book that made me enjoy it as much as I did was the contrast between the magical and the ordinary. If you wasn’t aware, Adelaide and her twin brother Augustus have to go to a magic school to be protected from their murderous father (a little Harry Potter, but we can cope), but in order to be accepted into this school they have to complete a 3 week initiation where they are split into two groups and set a series of tasks and obstacles whilst getting from A to B, A being at the top of a very tall mountain and B being at the bottom of it. The initiation itself somewhat reminded me of the Catching Fire with the Exemplars (the heads of the school) putting obstacles such as dragons and elves in their way making it harder to reach their destination. The best thing about the magical aspects of this novel is that they are highly unexpected, with the world being seemingly normal and then you’re hit with something magical and it’s fantastic!

In addition to the very enjoyable story line, I must admit the characters are also very much enjoyable (is that even a thing?). Each person that is in Addie’s initiation team (Tempe, Liam, Maddox and Fallon) is just as interesting as each other. Tempe, Liam and Maddox have all known each other for many years and are all very close to one another especially Maddox – Tempe and Liam-Maddox, but for some reason there is something off between Tempe and Liam where they seem a little awkward around each other. Fallon is a whole different level, with his ever changing attitude to everyone ranging from hostility, to caring to pushing people together and apart. You’re always left wondering what each of their stories are and wanting to know more about them previous to where we initially met them. I would say I have a favourite character, but their all so unique that it’s difficult to choose I love them all equally – although I must admit I do have a soft spot for Liam with his wit, charm and ability to always to give everything a go no matter what.

Of course like every novel there is a love story. Throughout you can never quite tell what anybodies current relationship is (whether that be friendship or romance) as they never really give too much away, so you’re always left wondering and eager about where each relationship is going and whether or not it’s a positive or negative one. For me, this really intrigued me and was a lot more realistic as when several young people spend 3 weeks together relationships are bound to waver. However, the thing that slightly ruined it for me in this book was the romance, I’m not going to give away who it is between because who wants spoilers? no one, but for me, like the beginning it was all very rushed and seemed a little cliche/cheesy and I just wasn’t a fan of it. One minute these characters were communicating like everyone else and then BAM they’re in love? It just all seemed a little too rushed for me. However, the twist surrounding the love story, now that is something very interesting indeed and I am very eager to find out much more about it.

Despite some aspects about this book which were a little iffy and it feeling slightly rushed, I did overall very much enjoy this book. It was very easy to read and you literally fly through it, I am not joking, if I didn’t have so much university work to do I probably would have read it in one sitting. My biggest problem is, is that at the ending you still hadn’t found out answers that you wanted to know at the beginning of the book, so when you finish it you are literally craving more and more. I need answers ASAP.
I will be definitely getting my hands on the second book to this series if there ever is one and I would 100% recommend it as in spite of its bad points, the good points bring it through and I really enjoyed it!

One thought on “Review: ‘The Auctor Trilogy’ by T.R Wolf”